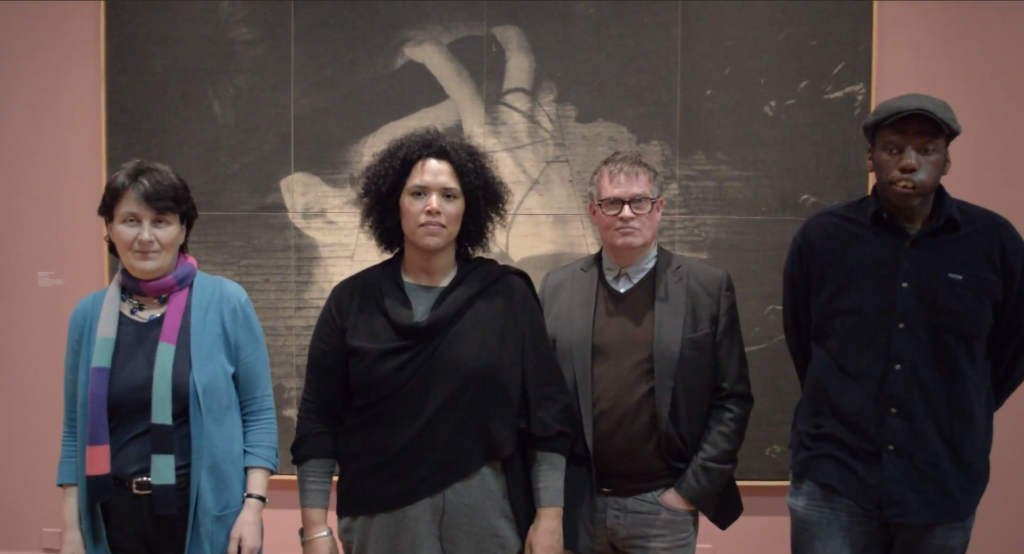 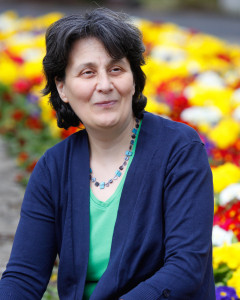 Although I have been around the visual arts for a long time, including curating the Festival’s 40th anniversary exhibition and once as a wide-eyed student, being asked to ‘clear up’ a floor sculpture people were treading on at a private view- I remember crouching on the floor, shovelling it into a bin bag, feeling sacrilegious –  it’s still exciting to go ‘backstage’ when an exhibition’s being hung. A bit like staying the night at the Natural History Museum.

Rommi, Nigel, Kenny, the musician working on the project, and I, had been sitting round the table, grappling with complicated and important ideas: should the ‘creative case’ still need making? And even if it does, whose responsibility should that really be? Surely by now people understand that diversity ensures a variety of perspectives, makes the arts exciting, nuanced, artistically challenging – whatever the artists involved choose to work on – and ensures we don’t arbitrarily exclude half the people whose work we could be enjoying. We touched briefly on how who you are never goes away but how you don’t necessarily want to make work that constantly foregrounds it. Sometimes being a woman and having a rich mixed heritage is centre stage of what I write, sometimes it just lurks in the wings

Rommi talked about the need for us all to ‘be awake’- to be aware of that there are parameters and a political context for our playful explorations and how important it was for all of us to see our own ‘othernesses’ (whatever they are) as of equal importance within a diversity context.

And she raised important concerns about the problematic nature of short-term diversity policy projects which, specifically and particularly engage artists of colour and then are found lacking in terms of longer-term implementation and impact.

And when we found ourselves getting hemmed by how other people saw us, Nigel suggested we should try taking ourselves back to the work, go and explore it, in the gallery next door.

Which is how we found ourselves, squatting on the floor, surrounded by flip charts, heady with Kenny’s music, while the exhibition’s curator and her colleagues in white gloves hung the exhibition around us. It was like being in the middle of a piece of contemporary dance: they would stand considering one of the pictures propped up against the wall, and then point across the room. And at that signal, someone in white gloves would carefully pick up the picture, holding it upright between two hands and cross the gallery floor. Gradually I could see there was a conversation going on between the pictures, which one balanced with which, how the colours related or perhaps overshadowed one another. At the same time, we were having a written conversation with one another, scribbling our thoughts and replies on the flip charts as we looked at the images, and with Kenny as we responded to his improvisations. And now and again passing members of the public peered through the glass doors into the gallery to watch this unusual spectacle, so that we in our turn found ourselves ‘in the frame’.

Lots of people assume that working in the arts means you have time to explore ideas- spend your days having great thoughts or wafting about in a creative haze. The reality is, whatever your art form, we’re almost always heads down, working on practical tasks to tight deadlines. So, our latest project, From Outside the Frame, part of Creative Case NORTH’s ‘Explorations’, is a joy. There’s no end product- we don’t have to come up with an event, a performance, an exhibition or an epic poem. The focus is on sharing ideas, conversations and thoughts, experimenting as we go along – and being creative. The only constraint is that we document and share the process.

The Creative Case NORTH Explorations are a series of residencies and partnerships which provide organisations and artists with time and space for experimentation and exploration on the theme of the Creative Case for Diversity – a re-imagining of the Arts Council’s approach to diversity and equality.

For From Outside the Frame, myself, Nigel Walsh (curator at Leeds Art Gallery) and poet and playwright Rommi Smith will be taking Leeds Art Gallery’s upcoming exhibition One Day, Something Happens: Paintings of People as a starting point for a series of conversations, experiments and reflections.

Our first meeting was just the three of us and some pieces of paper in a tiny meeting room at Leeds Art Gallery. Feeling I ought to at least be looking organised, I’d printed out a rough agenda- how did we want to approach the project; what practicalities did we need to consider, dates we could get together, just as I would for any other meeting. But pretty much immediately the list went out of the window.

Instead Rommi started talking about real and imagined archives – and we meandered happily around what isn’t seen- what is absent and how we construct or imagine it. We touched on Jacques Derrida’s idea of meaning between the cracks. We talked about missing archival material – the letter that was never written or has disappeared, the conversation we assume someone had, that we can only imagine. What happens Rommi said, if we create a living archive which includes our imaginings of that material?

That reminded me of Julie Myerson’s book Home: The Story of Everyone Who Ever Lived in Our House – in which she traced everyone who had lived in her house in London. From the fragments she could piece together she re-constructed their lives in those rooms and in many cases, conversations that might have taken place.

We talked about how personal experience colours our vision or understanding. I remembered a recent television feature which included chilling contemporary cine footage of the family of the Auschwitz commandant playing in a paddling pool in their garden with the camp clearly visible behind. I hardly registered the foreground and only saw the camp beyond the fence (my family includes Jewish refugees and Holocaust survivors).

Then, slowly, we turned our attention to the upcoming exhibition at Leeds Art Gallery One Day, Something Happens: Paintings of People, our starting point for the project. Looking at a tiny image of ‘Northern Ritual’ by Ryan Mosley which will be in the exhibition, Rommi and I saw three or four black women, perhaps from the sixties, with Angela Davies style afros, getting ready for a night out. When Nigel showed us a much larger photograph of the same work, we realised at once we were mistaken – the picture shows white women with stylised, almost botanic, heads, engaged in some kind of ritual while other women look on. As the project continues we’ll be spending more time at the gallery both before and after the exhibition is hung, thinking, discussing and exploring.
After the meeting I went out into the bright February sunshine re-energised; with the feeling there were so many intriguing layers to explore and excited by the prospect of having time do so.

As part of From Outside the Frame we will be recording some of our experiences and discussions via this blog and social media. 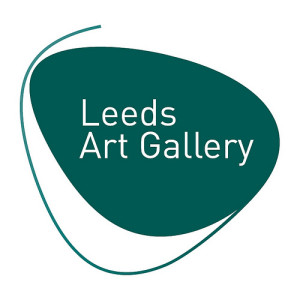